The coming of the railroad established quite a few towns in Hampton County. Before the Charleston and Western Carolina Railroad began construction, the area now known as Brunson was not even a settlement area. The construction of the railroad brought people, which in turn helped build the Town of Brunson. 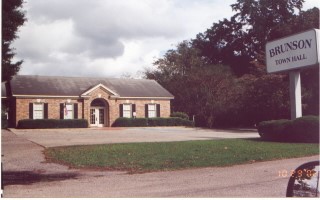 A post office was constructed in the area on November 7, 1872 on a site donated by William Edgar Brunson Senior. Brunson, a large landowner, also gave the right-of-way for the construction of the railroad and ten square acres for the establishment of the town. The Town of Brunson, which was chartered in 1874, and was named in Brunson's honor. An octagonal structure, which still stands, was built to serve as the town hall for the community of Brunson. The building was originally built on wood piers to shade the town's artesian well. It was relocated in 1959 to its present location and is used as a museum.

The town hall moved to its present location in January 2002, the site of the old Hampton County Bank (BB&T bank). The town is located in the northeastern section of the county. The major highway through the town is Highway 278.