The Town of Yemassee is a small town rich in local history. In the late seventeenth century, when Englishman began to settle coastal Carolina, a number of tribes, mostly of Muskogean stock, inhabited the area. Of those tribes, the Yamasee Indians were the most extensive and powerful. Its territory stretched along the coast from southern Georgia to the Edisto region. 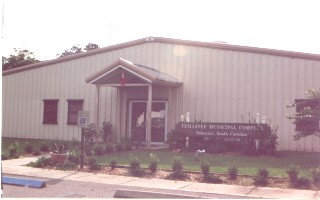 The Yamasee's two major centers of power lay between the Savannah and Combahee Rivers at Pocataligo and Coosawhatchie. Towards the end of the War between the States, Sherman's army came through the area on his infamous march to the sea from Atlanta, Georgia. All of the churches in the area were destroyed, except for the Presbyterian Church, which was used as a hospital by the union army. Blood stains on the floor are visible on the still standing church.

After that war, the Port Royal-Augusta Railroad was constructed. At that time, the railroad hamlet of Yemassee was formed from the lands of Richfield Plantation and portions of the Cuthbert lands. In 1868, a post office was established. The house where Somerest Maughn wrote the Razor's Edges is located in that area. There is also a house designed by Frank Lloyd Wright, the famous architect. The house is unique in its design as having no right angles. The house is located on Auld Brass Plantation and has been refurbished.

The town is located in the southeastern section of the county. Major highways passing through the town include Interstate 95 and Highway 68.
Online Bill Pay
Pay your traffic tickets and taxes.
Receive Notifications
Get updates on county news, events, and more.
CPST Projects
View photo gallery of recent projects.
Agendas
Minutes
Videos
Here we offer meeting agendas, videos, and minutes from past meetings.
Employment
View current openings.
Recreation Programs
Sign up today!
Report a Concern
Let us know about litter, potholes, and unsafe conditions.
[]